Sorry sorry it’s been so long since my last update! I had a rough past week but I’m feeling emotionally and physically stable once more and ready to get back in the kitchen.

Theeese are the best vegan chocolate chip cookies I’ve had.  Suffice to say, the only that I remember having.  But they’re goooood.   According to Ann Gentry these cookies have a history, and a biscuit-like variation was used way back when people were emigrating from Europe to here on the Mayflower.   Older than sugar cookies, for sure.

Now that you’ve learnt a little somethin’, let’s get baking! This makes about 12-15 cookies… depending on how much batter you ingest (oops) #sorryimnotsorry

Preheat the oven to 325.  Line a baking sheet with parchment paper.
Stir the flour, oats, cinnamon, baking soda, and salt all together in a stand mixer, using a paddle attachment, on medium-high speed.  While that is blending, slowly beat in the vegan butter and maple syrup until it is fluffy, which should take 5-8 minutes.  You can do this by hand, by the way, but it will take significantly longer.
Mix in the barley malt, maple syrup, and vanilla, beating until fluffy, about 4 minutes.  Stir in the chocolate chips and pecans.
Using an ice cream scoop, space 6 mounds of dough far apart from each other on the baking.  Bake for 20 minutes, until they puff and are golden-brown.
Okay.  So here’s where I interject and tell you how I messed up baking yet again.  Definitely no overconfidence this time, I was expecting some kind of mistake.  First of all, let me emphasize fluffy.   If it doesn’t look fluffy to you, keep mixing away! I didn’t do this, so my cookie flavor tasted awesome but the texture was meh.  Secondly… I was dumb again in terms of sizing the dough.  I put on way too much, and 9 cookies on the sheet instead of 6, and they ended up being ginormous and crowding each other.  Mine were not puffy, but crispy.  And they were a darker brown, not golden brown. I think I’ve learned my lesson.
All mistakes considered, this is still a fantastic vegan dessert.  Just as good if not better than its eggy, milky counterpart. 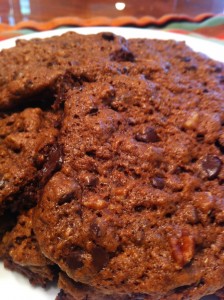